An espagnolette (espag) uPVC window lock is the gearing part inside a window that a spindle drive uPVC window handle operates and locks the sash to the frame, it seals from drafts and also secures the window shut.  The picture below shows one of many different types.  You measure from the middle of the spindle hole to the top of the face rail, this will give you your backset. 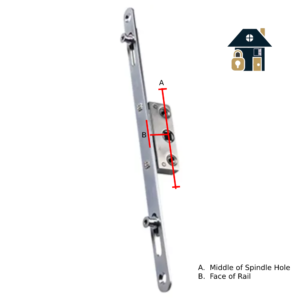 Dimension A– Middle of Spindle HoleDimension B– Backset – Measurement from middle of spindle to the face of the rail, usually 20mm, 22mm, or 25mm.

Know which lock you need?

Espagnolette window locks have different backset measurements. It is important that the backset of the replacement is the same as the backset of the original otherwise modification of the window frame may be required. There are three holes in the side of every gearbox, the centre one being the spindle hole and the other two screw holes for the handle. The distance between these three holes is universally the same at 43mm.

The difference between offset and inline espag uPVC window locks 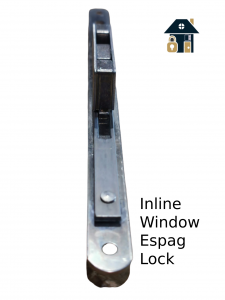 There are many different makes of window mechanism rail locks and they can be changed for other makes as long as the basics of the cams (roller or mushroom cams) are the same backset, rail length, rail width, cam height, and still inline or offset. If a different make is used but they are otherwise very similar then it is likely that the keeps will need to be re-positioned due to the cams being in a different position on the rail. On occasions, the hole for the gearbox in the window frame may need to be enlarged when using a different brand but it is rare.

Mechanisms also have another difference between the offset and inline, the inline has a flat rail and the offset has a u shape rail.

Most modern mechanisms have mushroom cams, they are called this for the shape of the came, (roller wheels going up and down when the handle is turned) These can be adjusted using an Allen key or sometimes a flat-headed screwdriver to increase compression on a slack window (symptom: handle goes into closed position too easily) or decrease window compression on an over tighten window (symptom: the handle has to be forced into closed position)

We use cookies on our website to give you the most relevant experience by remembering your preferences and repeat visits.

By clicking “Accept”, you consent to the use of ALL the cookies.

This website uses cookies to improve your experience while you navigate through the website. Out of these, the cookies that are categorized as necessary are stored on your browser as they are essential for the working of basic functionalities of the website. We also use third-party cookies that help us analyze and understand how you use this website. These cookies will be stored in your browser only with your consent. You also have the option to opt-out of these cookies. But opting out of some of these cookies may affect your browsing experience.
Necessary Always Enabled
Necessary cookies are absolutely essential for the website to function properly. This category only includes cookies that ensures basic functionalities and security features of the website. These cookies do not store any personal information.
Non-necessary
Any cookies that may not be particularly necessary for the website to function and is used specifically to collect user personal data via analytics, ads, other embedded contents are termed as non-necessary cookies. It is mandatory to procure user consent prior to running these cookies on your website.
SAVE & ACCEPT